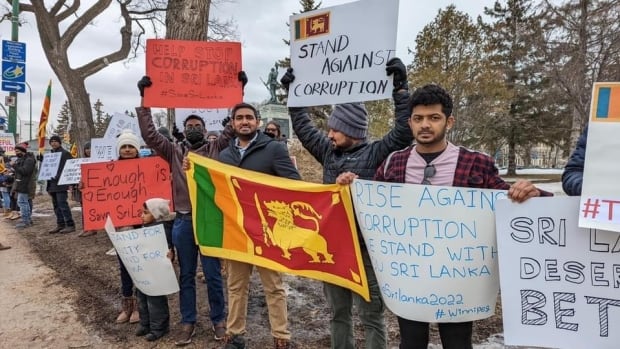 Winnipeggers come together to support Sri Lankans, who are facing the worst economic crisis in decades

As Sri Lanka grapples with its worst economic and political crisis in decades, some Winnipeggers are stepping up to send support home.

Mahinda Rajapaksa was just a member of a political dynasty which includes his brother. Gotabaya Rajapaksa remains in power as president, but many are also calling for his resignation, including some Sri Lankans living in Winnipeg.

Shenaly Kuluppuarachchi studies global political economy at the University of Manitoba. She misses her parents, whom she has not seen since before the pandemic, but the situation at home does not allow her to travel safely.

“We cannot concentrate on our daily tasks,” Kuluppuarachchi said. “The first thing I do is call my mom and see if everything is okay, when I wake up in the morning.”

His parents live in Colombo, a city now in crisis. Protesters were attacked this week by government supporters, and 23 of them were hospitalized.

Protesters had camped outside the president’s and prime minister’s offices for a month, calling on them to resign.

Mahinda Rajapaksa’s resignation on Monday sparked violence and fires at the homes of politicians.

Sri Lankan Prime Minister Mahinda Rajapaksa has resigned after weeks of protests demanding that he and his brother, the president, step down following the country’s worst economic crisis in decades.

President Gotabaya Rajapaksa declared a state of emergency last Friday, allowing him to authorize detentions, seizure of property and searches of all premises.

It can also modify or suspend any law in the interest of public safety and for the maintenance of essential supplies.

In Winnipeg, Kuluppuarachchi was glued to the powerful online images of tanks and troops patrolling the streets of Colombo.

“I also saw the police and the armed forces shooting randomly to disperse the crowds, which I don’t think is fair,” the 25-year-old said. “This is a fundamental violation of human rights.”

Kuluppuarachchi has helped organize recent protests here in Manitoba, including one at the Legislature in April. She said she was proud to support Sri Lankans who stood up in Colombo, including her parents.

They run a grocery store and face first-hand the shortages that have plunged Sri Lanka into crisis. The island nation imports much of its supplies, but its economy has virtually collapsed.

For several months, Sri Lankans have endured long queues to buy fuel, cooking gas, food and medicine, most of which come from abroad.

Inflation soared to 18.7% in March, partly due to a lack of hard currency, and continued to rise in April, with the Central Bank of Sri Lanka reporting that the consumer price index consumption rose to 29.8% in April, food inflation to 46.6% that month.

Protesters who have taken to the streets of Sri Lanka since March claim the former prime minister and his family – who have dominated almost every aspect of life in Sri Lanka for most of the past 20 years – are responsible for the crisis economic.

“The cost of living is skyrocketing,” Kuluppuarachchi said. “And then there was a huge drop in sales, which affected my parents.”

She said many of her parents’ customers needed powdered milk, a staple in a country with a hot climate and low refrigeration.

Medical supplies are also scarce. The Sri Lankan Association of Manitoba raises funds for the purchase of equipment and medicines.

“If we could save at least a few lives in these difficult times, I think that’s the best we can do,” said Vajira Pathirana, president of the association.

With around 800 Sri Lankan families now living in Winnipeg, Pathirana says her association is considering a reunion for community members struggling with the unrest in their country.

“It affects just about everyone, regardless of race, religion, language we speak,” he said. “Everyone is in the same boat.”

Pathirana said the group has raised around $8,000 to help Sri Lankans cope with COVID-19, and more than $1,000 to help during the current crisis, but they have yet to reach out to the community. large Winnipeg community.

Sri Lanka is in political turmoil, grappling with its worst economic crisis in decades. This week peaceful protesters were attacked and the prime minister resigned. All of this weighs on Sri Lankans in Winnipeg.